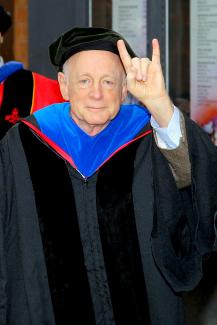 Norm Glickman, Urban Studies founder and long-time cheerleader and nudger,  passed away on the evening of May 8 surrounded by his family and close friends.

Norm put in place the guiding principles that shaped Urban Studies at Penn in the late 1960's/early 1970's when, as an Assistant Professor in City Planning, he took on a group of idealistic and committed undergraduates interested in studying cities. The stars were aligned because the new Penn President, Martin Meyerson, was a city planner, which allowed Norm to navigate the institutional waters and make the major official. The essence of the program -- its commitment to connecting theory and practice -- was there at the beginning. Norm left Penn later in the 1970's for the University of Texas and then Rutgers' Bloustein School of Planning (here is their obituary) -- but he remained a constant support and encouraged us to stay connected to our incredible alumni. When his daughters became Penn students, Norm graced us with his presence on Monday evenings to teach a section of the urban studies senior seminar. He retired from Rutgers just a few years ago, after completing his most recent book as a co-author, LBJ's Neglected Legacy: How Lyndon Johnson Reshaped Domestic Policy and Government.  He certainly left an incredible legacy -- as an institution builder, an intellectual leader, and as a friend and mentor.


To honor the memory of the Norm Glickman

Please follow this link, and use the "In Memory" field to enter Norm's name.