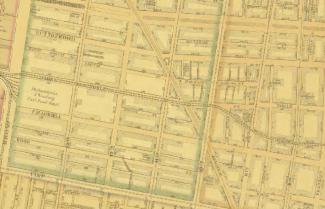 Since 2011, Ira Goldstein and Mark Stern have taught URBS200—Urban Research Methods—using a community case study approach. We have chosen a neighborhood and used a variety of quantitative and qualitative methods to learn about its economic, social, and cultural life.  Because Philadelphia is a dynamic city, these case studies typically focused around issues of community change: what has changed and how have those changes affected community residents?

Beginning in 2014, Stern added an additional step.  During the final weeks of the semester, students were asked to condense all of the work for the semester into a single report.

In 2014, the class studied Point Breeze, which, for decades, was a high-poverty predominantly African American neighborhood. In recent years, the neighborhood has experienced a building boom and an influx of more affluent residents.  In 2015, the students turned their attention to Mantua and Powelton Village in West Philadelphia.  There we discovered that institutional players—especially Drexel University and its students—are having the most profound impact on the neighborhood’s built environment and residents. In 2016, the students studied the Chinatown North/Callowhill neighborhood north of Vine Street and east of Broad Street, a neighborhood with a long history of serving as a temporary home for a variety of groups, including single men and immigrants.