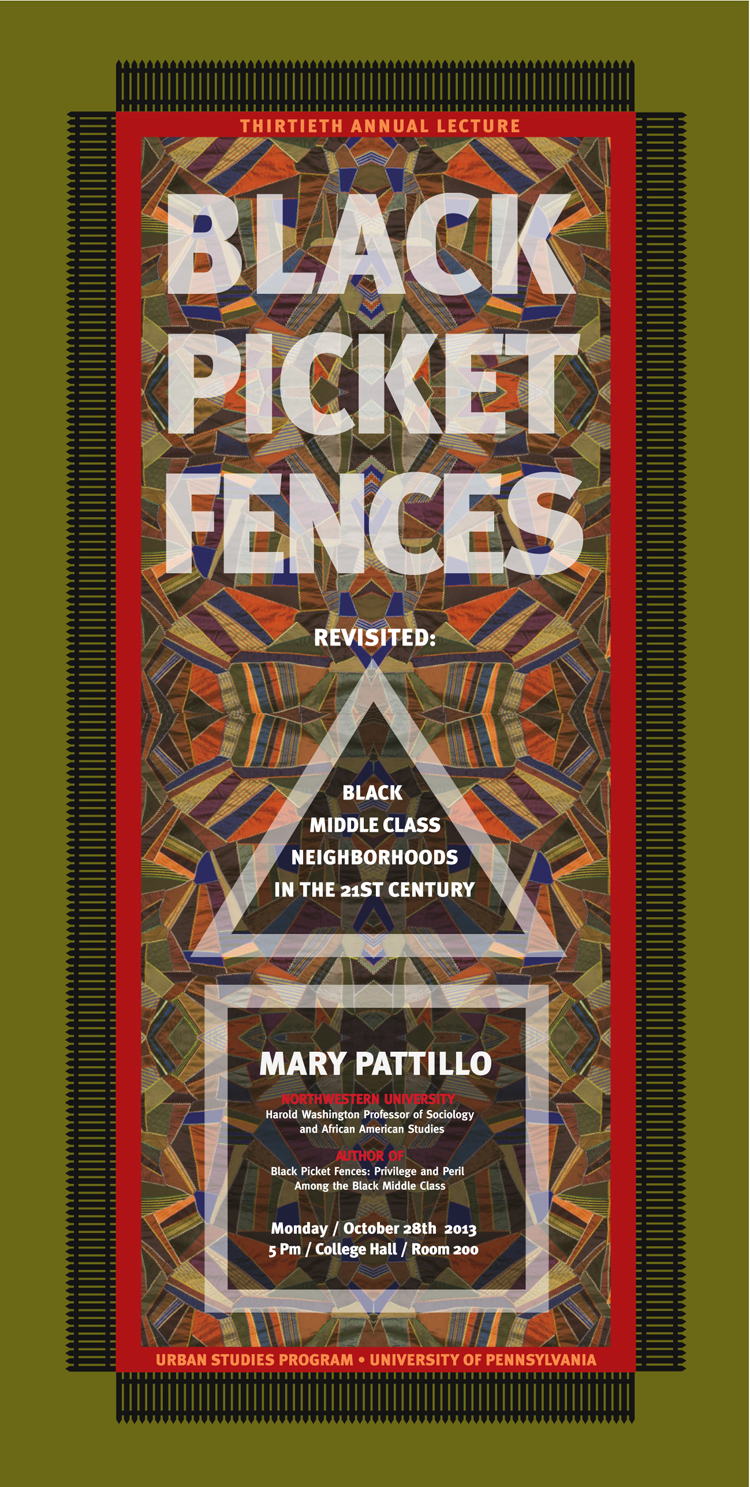 Or listen to just the audio here:

Mary Pattillo, Harold Washington Professor of Sociology, Northwestern University, will be our 30th Annual Urban Studies Public Lecturer, and will give a lecture entitled "Black Picket Fences Revisited: Black Middle Class Neighborhoods in the 21st Century.” The event takes place Monday, October 28, 2013 at 5:00 PM, in College Hall 200. The lecture is free and open to the public.

The lecture draws on new research carried out for the 2013 Second Edition of Professor Pattillo’s book, Black Picket Fences: Privilege and Peril Among the Black Middle Class published by the University of Chicago Press.

Pattillo uses the city of Chicago as her laboratory and strives to be an expert in Chicago history, politics, and social life. First published in 1999, Mary Pattillo’s Black Picket Fences explores an American demographic group often ignored by both scholars and the media: the black middle class. Nearly fifteen years later, this book remains a groundbreaking study of a group still underrepresented in the academic and public spheres. The result of living for three years in “Groveland,” a black middle-class neighborhood on Chicago’s South Side, Black Picket Fences explored both the advantages the black middle class has and the boundaries they still face. She illuminated the economic, spatial, and cultural forces that affect child-rearing and youth socialization in this setting. Despite arguments that race no longer matters, Pattillo showed a different reality, one where black and white middle classes remain separate and unequal. The first edition of Black Picket Fences won the Oliver Cromwell Cox Best Book Award from the American Sociological Association.

Pattillo conducted new interviews with many of the same neighborhood residents featured in the original for the second edition of the book, which allows her to trace how “Groveland” fared over time, including the impact of the recession of 2008 on the neighborhood and its residents.  As one reviewer noted, Pattillo’s work is skillful in “shifting the dialogue concerning the inner-city from its focus on social pathologies of the poor to a more holistic discussion of stratification and social interaction.”

In addition to her appointments in sociology and African American studies at Northwestern, Professor Pattillo is also a Faculty Affiliate with the Institute for Policy Research. Her Ph.D. is from the University of Chicago 1997, and her areas of interest include race and ethnicity (specifically the black middle class), urban sociology, and qualitative methods.

Her second book, Black on the Block (University of Chicago Press 2007) focused on gentrification and public housing transformation in North Kenwood - Oakland on Chicago's South Side. The book develops the concept of   "middlemen" and "middlewomen," the roles that black professionals play in working alternatively to mediate or exacerbate racial and class inequality. It won the Robert Park Book Award and a proclamation of the City of Chicago.

Current research projects include a study of how parents negotiate school choice and how families make housing choices in Chicago, Pattillo also has a growing interest in race in Latin America, and is a member of the MacArthur Foundation-funded Research Network on How Housing Matters for Families and Children.

Pattillo is a founding board member and active participant in Urban Prep Charter Academy, the first all-boys public charter high school in Chicago.