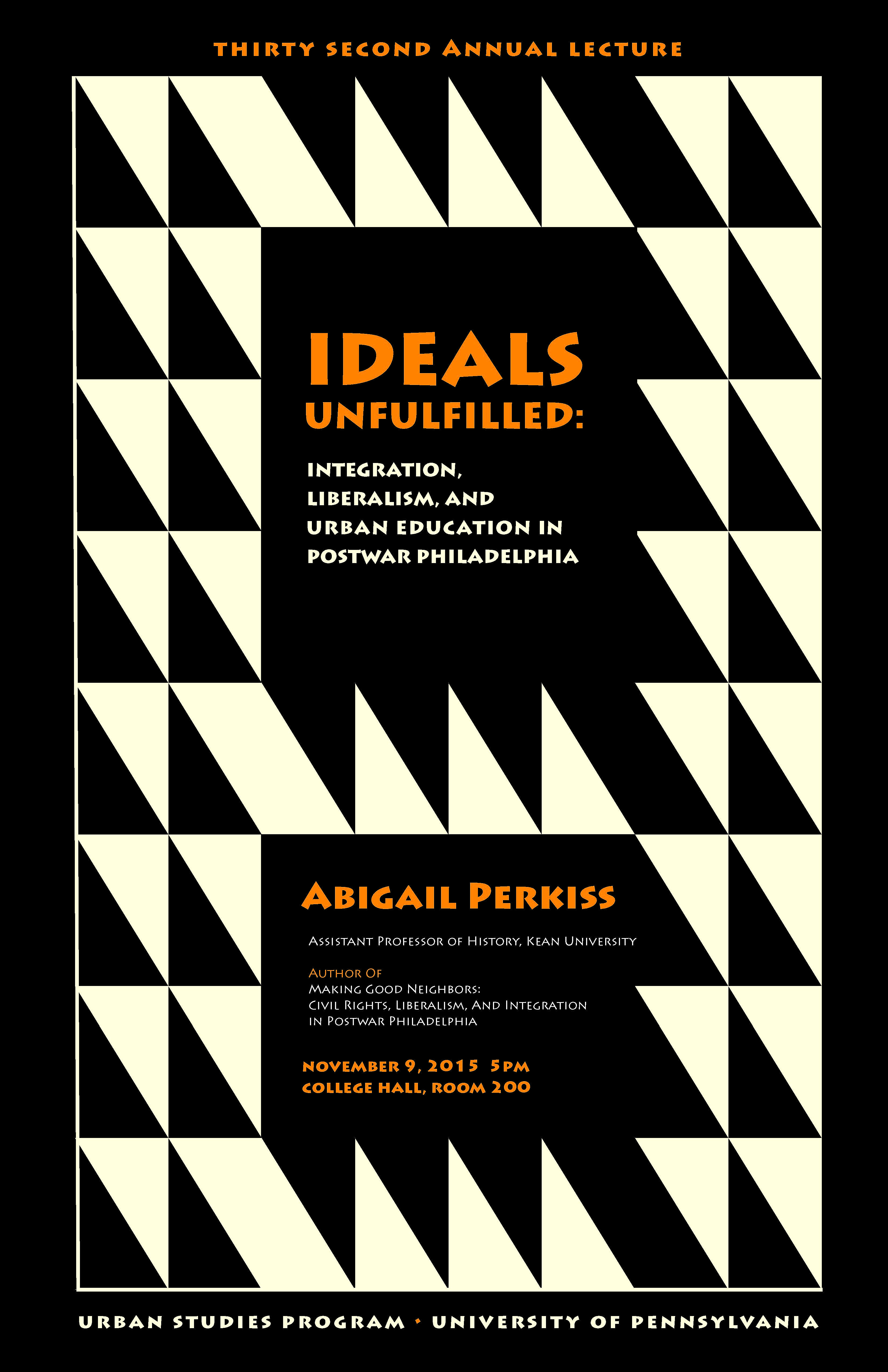 Abigail Perkiss, Assistant Professor of History at Kean University in Union, NJ, is our 32nd Annual Urban Studies Public Lecturer. Her lecture is entitled "Ideals Unfulfilled: Integration, Liberalism, and Urban Education in Postwar Philadelphia” and will take place Monday, November 9, 2015 at 5:00 PM in College Hall 200 on the Penn Campus. The lecture is free and open to the public.

If you missed it, catch the video here!

Drawing on her book, Making Good Neighbors: Civil Rights, Liberalism, and Integration in Postwar Philadelphia, Abigail Perkiss focuses on Philadelphia’s West Mt. Airy neighborhood as a case study of the creation of intentionally integrated neighborhoods in the latter half of the twentieth century. Her research centers on the history of race, ethnicity, and urban identity in post-WWII American cities, and has been guided by questions of identity creation, community cohesion, and historical memory. In her lecture, Professor Perkiss will highlight her findings as they relate to public education in Mt. Airy and point to larger lessons for the ideal of integrated schools.

In the 1950s and 1960s, as the white residents, real estate agents, and municipal officials of many American cities fought to keep African Americans out of traditionally white neighborhoods, Philadelphia's West Mount Airy became one of the first neighborhoods in the nation where residents came together around a community-wide mission toward intentional integration. As West Mount Airy experienced transition, homeowners fought economic and legal policies that encouraged white flight and threatened the quality of local schools, seeking to find an alternative to racial separation without knowing what they would create in its place. Professor Perkiss draws on archival research and her oral history interviews with residents to trace their efforts, which began in the years following World War II and continued through the turn of the twenty-first century. The West Mount Airy case stands apart from other experiments in integration because of the intentional, organized, and long-term commitment on the part of local organizations to biracial integration and, in time, multiracial and multiethnic diversity.

She is currently directing Staring out to Sea: The Story of Superstorm Sandy in Three Bayshore Communities, an oral history project documenting the impact and aftermath of Hurricane Sandy in three neighborhoods along the Sandy Hook Bay.