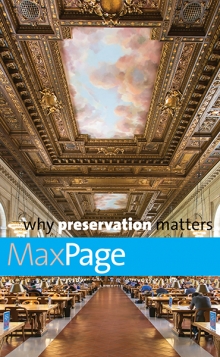 Max Page, Professor of Architecture and History at the University of Massachusetts Amherst, will deliver the 34th Annual Urban Studies Public Lecture.  The title of the lecture is “Why Historic Preservation Matters: Building a More Just City.” It is scheduled for Monday, October 30, 2017 at 5:30 PM in Room 200 of College Hall.  The lecture is free and open to the public.  This event is co-sponsored with Penn Praxis, and the Fels Policy Research Initiative.

Professor Page, whose Ph.D. in History is from the University of Pennsylvania, teaches and writes about the history of cities and architecture. The lecture will draw on his most recent book, Why Preservation Matters (Yale University Press 2016). Written as the National Historic Preservation Act realizes its fiftieth anniversary, the book offers a thoughtful assessment of the preservation movement and charts a vision of a more progressive future.

As Americans are now acutely aware, the meaning of monuments and old buildings can be quite contested. Professor Page argues that the preservation movement can face these issues by linking to social movements for justice in the city.  Page argues that if preservation is to play a central role in building more just communities, it must transform itself to stand against gentrification, work more closely with the environmental sustainability movement, and challenge societies to confront their pasts.  Touching on the history of the preservation movement in the United States and ranging the world, Page searches for inspiration on how to rejuvenate historic preservation for the next fifty years. As he writes in the book: “Preservation is impossible to understand without the stories of meaningful places – the celebratory, the uplifting, the beautiful, but also the painful, the shameful, and the divisive.”  Anyone interested in how to honor the past while working toward an equitable and sustainable city will gain insight from Professor Page’s ideas.

Max Page has written or edited eight books and articles in publications both scholarly and popular on a wide range of topics related to the urban built environment. Among the topics he has covered are the history of skyscrapers, rebuilding after disaster, protest and public space, and the evolution of the historic preservation movement. His book, The Creative Destruction of Manhattan 1900-1940 (Chicago 1999) won the Spiro Kostof Award from the Society of Architectural Historians. Among his other books are The City’s End: Two Centuries of Fantasies, Fears, and Premonitions of New York’s Destruction (Yale University Press 2008) and Bending the Future: 50 Ideas for the next 50 years of Historic Preservation in the United States (co-edited with Marla Miller (University of Massachusetts Press 2016).  His recent awards include a Guggenheim Fellowship and the Rome Prize.