"Uneasy Peace: The Great Crime Decline, the Renewal of City Life, and the Next War on Violence" 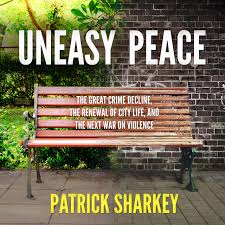 If you missed the lecture, watch it here!

Sharkey’s lecture draws on his recent book, Uneasy Peace: The Great Crime Decline, the Renewal of City Life, and the Next War on Violence (W.W. Norton 2018). Listening to the news or politicians, we might assume that crime rates remain high or are even on the increase in cities. Sharkey reviews the evidence that violent crime rates have fallen steeply over the past two decades in American cities. More recently, he points out, cities have experienced a renaissance in public life. Uneasy Peace teases out the inter-relations between these two trends and looks at both the positive and negative explanations. On the one hand, he examines the contribution of aggressive policing and mass incarceration to the crime decline. On the other hand, he points to intensive efforts made by local organizations to confront violence in their own communities. While most of us have heard about the role of aggressive policing and mass incarceration as crime deterrents, Sharkey’s contribution is to show that local non-profit organizations that arise from within the most troubled neighborhoods deserve a lot of credit for the drop in crime.

Sharkey draws on original data from New York’s Harlem neighborhood to South Los Angeles and textured accounts of neighborhoods across the country to document the most successful proven strategies for combatting violent crime and to lay out innovative and necessary approaches to the problem of violence.

Professor Sharkey completed his Ph.D. in Sociology and Social Policy from Harvard University.  His previous book, Stuck in Place: Urban Neighborhoods and the End of Progress toward Racial Equality (2013) is the winner of multiple awards, including the Robert E. Park Book Award from the Community and Urban Sociology Section of the American Sociological Association in 2015, and the  American Publishers Award for Professional and Scholarly Excellence (PROSE Award) in Sociology and Social Work in 2013. Professor Sharkey has published many articles based on his research focused on the importance of place and how the conditions of neighborhoods -- including rate of violent crime -- can shape opportunity and contribute to inequality. He is also the Scientific Director of the Crime Lab New York.