A Neighborhood Politics of Last Resort: Post-Katrina New Orleans and the Right to the City 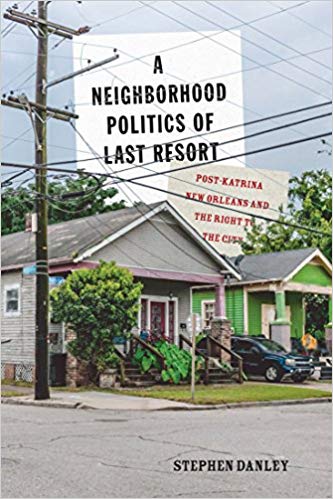 Join the Urban Studies Program and URBS 290: Metropolitan Nature for the opportunity to hear Professor Stephen Danley, Associate Professor of Public Policy and Administration at Rutgers-Camden University, speak about his fieldwork in post-Katrina New Orleans in his book A Neighborhood Politics of Last Resort: Post-Katrina New Orleans and the Right to the City.

The steep rise in neighborhood associations in post-Katrina New Orleans is commonly presented in starkly positive or negative terms - either romanticized narratives of community influence or dismissals of false consciousness and powerlessness to elite interests.

In A Neighborhood Politics of Last Resort, Stephen Danley offers a messier and ultimately more complete picture of these groups as simultaneously crucial but tenuous social actors. Through a comparative case study based on extensive fieldwork in post-Katrina New Orleans, Danley follows activists in their efforts to rebuild their communities, while also examining the dark underbelly of NIMBYism ("not in my backyard"), characterized by racism and classism. He elucidates how neighborhood activists were tremendously inspired in their defense of their communities, at times outwitting developers or other perceived threats to neighborhood life, but they could be equally creative in discriminating against potential neighbors and fighting to keep others out of their communities.