The Ecology of Homicide: Race, Place, and Space in Post-War Philadelphia 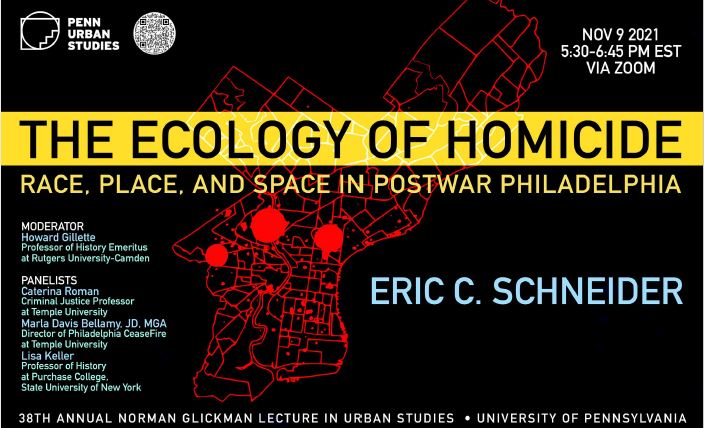 The 38th Annual Norman Glickman Lecture in Urban Studies is a virtual discussion of Eric C. Schneider’s posthumously published book The Ecology of Homicide: Race, Place, and Space in Post-War Philadelphia (Penn Press 2021) moderated by Howard Gillette Jr., Professor Emeritus of History at Rutgers University who brought Eric’s book to publication. The panel discussion engages the book and offers perspectives its lessons, both for understanding and ameliorating the current surge in homicides in Philadelphia, and in US cities more generally.

In The Ecology of Homicide, Schneider tracks the history of murder in Philadelphia during a critical period from World War II until the early 1980s, focusing on the years leading up to and immediately following the 1966 Miranda Supreme Court decision and the shift to easier gun access and the resulting spike in violence that followed. Philadelphia, like so many big cities in the United States, has suffered from a strikingly high murder rate over the past fifty years. Such tragic loss of life, as Schneider demonstrates, does not occur randomly throughout the city; rather, murders have been racialized and spatialized, concentrated in the low-income African American populations living within particular neighborhoods.

Examining the transcripts of nearly two hundred murder trials, The Ecology of Homicide presents the voices of victims and perpetrators of crime, as well as the enforcers of the law—using, to an unprecedented degree, the words of the people who were actually involved. Covering topics including gender, urban redevelopment, community involvement, children, and gangs, as well as the impact of violence perpetrated by and against police, The Ecology of Homicide provides a powerful link between urban history and the contemporary city.

For more background on the themes covered in the book, please check out Eric Schneider's article for the Encyclopedia of Greater Philadelphia, titled "Crime:" https://philadelphiaencyclopedia.org/archive/crime/

Author Eric Schneider (1951-2017) was Associate Director for Academic Affairs and Adjunct Professor of History in the School of Arts and Sciences at the University of Pennsylvania.  Eric had a long association with the Urban Studies Program, where he taught the Urban Studies Senior Seminar for 30 years. Characterizing himself as a scholar of the “dark side,” Schneider’s groundbreaking work included Smack: Heroin and the American City (2008, University of Pennsylvania Press), Vampires, Dragons, and Egyptian Kings: Youth Gangs in Postwar New York (1999, Princeton University Press), and In the Web of Class: Delinquents and Reformers in Boston, 1810’s-1930’s (1992, NYU Press).

--------
From now through Nov. 14th, use discount code ECOHOM30-FM at University of Pennsylvania Press (www.pennpress.org) for 30% off, plus free shipping in the U.S., for The Ecology of Homicide, Eric Schnieder's previous book, Smack: Heroin and the American City, and Howard Gillette's forthcoming The Paradox of Urban Revitalization: Progress and Poverty in America's Postindustrial Era.
--------

MEMBERS OF THE PANEL

(Moderator) Howard Gillette Jr., is co-editor of the on-line Encyclopedia of Greater Philadelphia and author of multiple books, most recently, The Paradox of Urban Revitalization: Progress and Poverty in America’s Postindustrial Era forthcoming from Penn Press.  A longtime friend and colleague of Schneider’s, he has taught Penn’s Urban Studies course, “The Transformation of Urban America.”

Since arriving at Temple University, Marla has served as the Director of Strategic Partnerships at the Center for Health Law, Policy and Practice at the Beasley School of Law and Executive Dir. for the Center for Minority Health and Health Disparities, Co-Director for the Center for Bioethics, Urban Health and Policy, Dir. of Civic Engagement and the Dir. of Phila. CeaseFire at the Katz School of Medicine. Marla has a strong background in public health, violence prevention, community development, and government affairs. She served for 6 years as Chief of Staff for the PA Dept of Health in Harrisburg, PA where she concentrated her efforts on violence prevention, health policy, and raising public and provider awareness of racial/ethnic disparities in care. Given her extensive leadership experience in violence prevention, Marla is serving as PI on several projects focusing on victim services, youth violence and replication of the evidenced based Cure Violence program.

A professor of history and member of the interdisciplinary gender studies faculty at Purchase College, State University of New York.  Dr. Keller specializes in trans-Atlantic (England and the U.S.), women’s, and urban history. She has published on New York, London, and Westchester County. She is executive editor of the Encyclopedia of New York City (second edition). Her book Triumph of Order: Democracy and Public Space in New York and London (Columbia University Press, 2008) received the Herbert H. Lehman Award for Distinguished Scholarship from the New York Academy of History in 2012 and the Urban History Association Best Book Award in 2009.  Dr. Keller serves as a historical consultant for the Museum of the City of New York and directs the Purchase College History project. She also is an adjunct research scholar in the history department at Columbia University, where she serves as chair of the Seminar on the City, University Seminars.

Caterina Roman joined the faculty in the Department of Criminal Justice at Temple University in Fall 2008 after nearly two decades with the Urban Institute in Washington, DC. Dr. Roman has extensive experience studying the social ecology of neighborhoods, fear of crime, violence and peer-based street groups. Her research utilizes a community well-being framework designed to better balance how applied research and evaluation is produced and consumed.  She has been the PI or co-PI on roughly two-dozen federally-funded evaluations of violence reduction programs and strategies to support individuals returning home from prisons and jails. In addition to her evaluation portfolio, her body of grant-funded work includes studies that examine how the personal social networks of at-risk youth and street group members influence anti-social and violent behavior, and she recently completed a study to assess help-seeking behavior and social support mechanisms used by men and women of color who have been victims of street violence. She is currently involved in a large National Institute of Justice-funded study to develop new methods to understand the costs and harms of crime that will combine hard-to-access cross-systems data with resident survey data from three sites. She regularly publishes in both public health and criminology journals. She holds a PhD in sociology and justice, law, and society from American University.

--
The Urban Studies Annual Lecture is supported by a gift from Norm Glickman, Elyse Pivnick, and alum William Witte.