"On the Run: Fugitive Life in an American City" 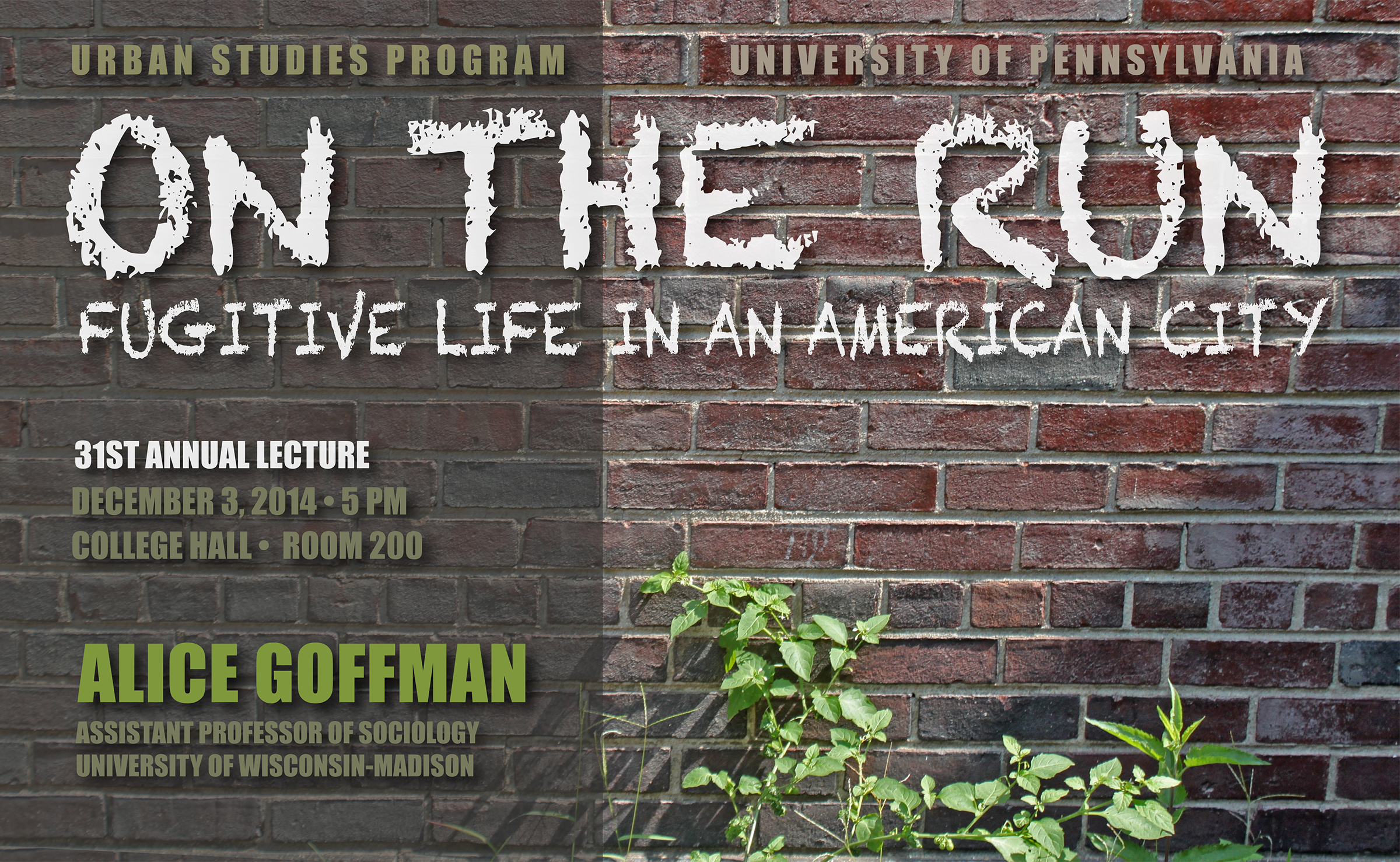 Alice Goffman, Assistant Professor of Sociology at the University of Wisconsin-Madison, is our 31st Annual Urban Studies Public Lecturer. Alice’s lecture “On the Run: Fugitive Life in an American City,” is based on her book of the same title, which was released this year by The University of Chicago Press.

Alice Goffman began her engagement with the figures and neighborhood that she describes in her book when she was an undergraduate at Penn in the early 2000's.  Starting out as a tutor, she found herself caught up in a complex and bewildering social world that she was determined to make sense of in the larger context of urban decline, race relations, and public policy. This book illuminates the on the ground processes that have led to the United States' distinction as having the world's highest rate of incarceration, disproportionately affecting urban racial and ethnic minorities. Forty years in, the War on Drugs has done almost nothing to prevent drugs from being sold or used, but it has nonetheless created a little-known surveillance state in America’s most disadvantaged neighborhoods. Arrest quotas and high-tech surveillance techniques criminalize entire blocks, and transform the very associations that should stabilize young lives—family, relationships, jobs—into liabilities, as the police use such relationships to track down suspects, demand information, and threaten consequences.

Alice Goffman's research is based on her six years living in one such neighborhood in Philadelphia, and her close observations and often harrowing stories reveal the pernicious effects of this pervasive policing. Goffman introduces us to an unforgettable cast of young African American men who are caught up in this web of warrants and surveillance—some of them small-time drug dealers, others just ordinary guys dealing with limited choices. All find the web of presumed criminality, built as it is on the very associations and friendships that make up a life, nearly impossible to escape.

While not denying the problems of the drug trade, and the violence that often accompanies it, through her gripping accounts of daily life in the forgotten neighborhoods of America's cities, Goffman makes it impossible for us to ignore the very real human costs of our failed response.

Alice Goffman received her Bachelor’s degree in Sociology from the University of Pennsylvania in 2004, and her Ph.D. from Princeton 2010.

- Read an op ed, a book review, a feature, and an economic take in The New York Times
- Read an excerpt in Vice
- Listen to an interview on NPR
- Listen to a podcast on Slate